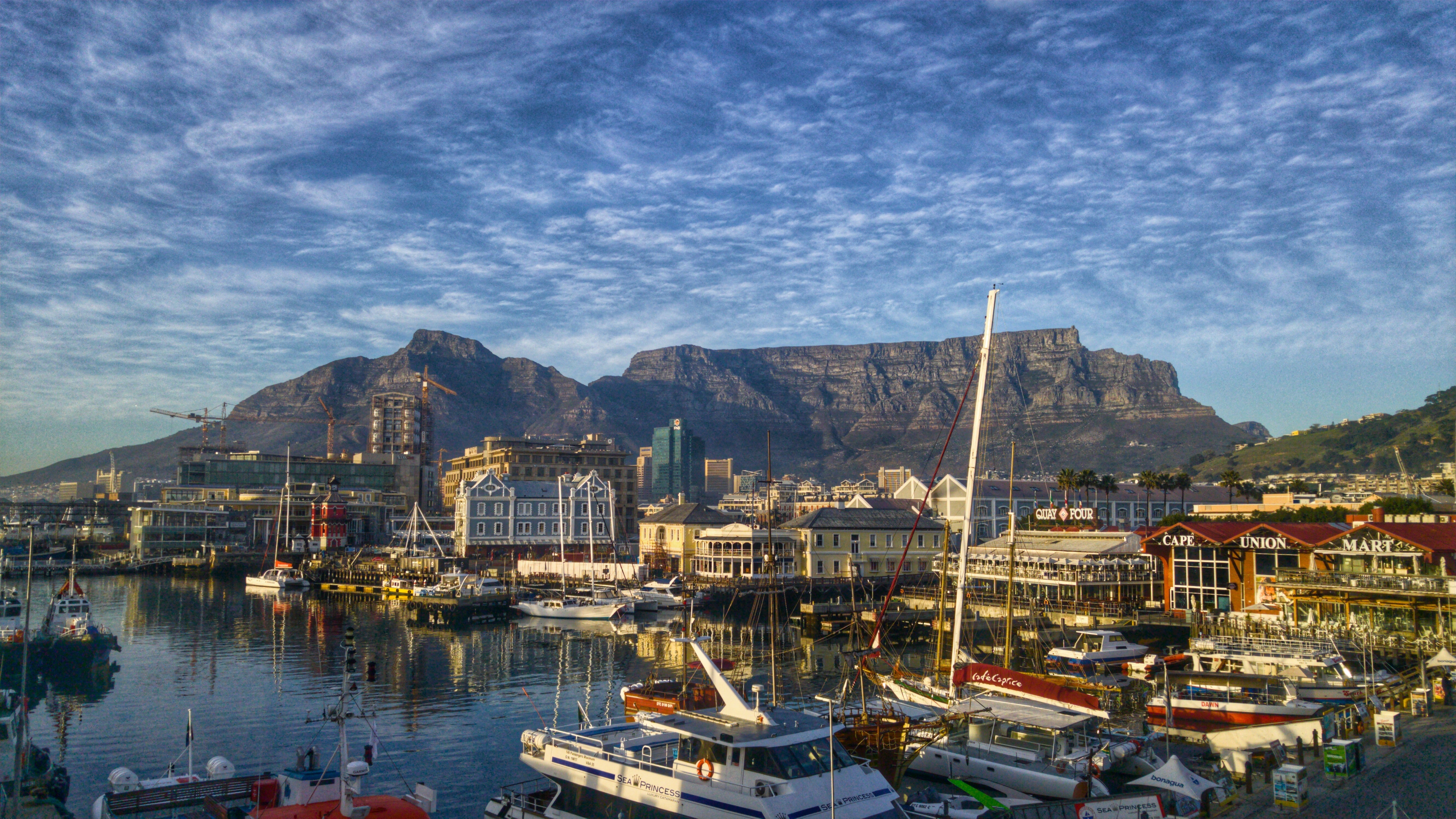 Cape Town is the oldest city in South Africa and is therefore often referred to as the Mother City. Although, it is also said that the city got its name because everything takes nine months. The people are very relaxed and things often take a very long time – even in business. Nestled between mountains and the sea, Cape Town offers unique scenery and breathtaking views.

As South Africa combines the first and third world, poverty and crime are unfortunately part of daily life. It is not recommended to walk about at night by yourself and you should always be aware of your surroundings. Expensive-looking jewellery and money should not be flaunted in public to avoid making yourself a target. But with some common sense, you can explore safely.

Cape Town is a vibrant city with a lot to offer: from theatre and concerts to art, shopping, good restaurants, and wines. South Africa is often referred to as “Africa for beginners” as, when you stand in the middle of Cape Town, you will realise that it is actually not that different from any other major metropolitan area in the world. Capetonians work to live and don’t live to work so you will find locals enjoying the city as much as possible and taking their free time very seriously.

Cape Town is a melting pot. With many expatriates living in the city as well as being located in a country with 11 official languages and even more cultures, there is nothing you won’t see. For business, a smart dress code is advisable but after hours “anything goes”.

South Africans like to do small talk and you should allow for some time for this in meetings before you even get to the actual topic. The city is very laid back and this will sometimes have an effect on business and it is not unusual for people to run late. However, as a foreigner, you are mostly expected to still be on time.

Because of the diversity in the country itself, all business etiquette is westernised. Most South Africans are very proud of their heritage and can take offence if you classify them belong to a different culture than they actually do. When in doubt, ask what cultural group they belong to. Most people love explaining their culture and customs to foreigners and can be a great icebreaker.

Most South African cultures are very matriarchal so women are well respected and don’t really face any restrictions, business or otherwise.

Public transport is problematic in the whole of South Africa.

Trains and buses are often run down and are always late if they come at all. For safety reasons, it is not advisable to make use of them. In the city centre, the MyCiti Bus has been introduced since the World Cup 2010 and is an option to get around in the city. However, you will need to buy the ticket upfront as it cannot be purchased on the bus and it should be avoided using them after business hours.

One of the biggest modes of transport for locals is minibus taxis. Whilst they operate on fixed routes, like busses, many are run down and their driving often very dangerous and should, therefore, be avoided. If you drive yourself, always maintain a safe following distance to the minibus taxi in front of you, as they stop anywhere at any time – literally.

Especially in the city, there are many reliable metered taxis that can be used – none specifically for ladies though. Best is to ask your hotel for a recommendation. If you are comfortable with the driver, it is often possible to get his number and keep calling the same person for your trip.

Uber and similar services have been in operation for a few years now and are usually cheaper than metered taxis. Unlike other cities in the country, they are safe to use but as with other modes of transport, you should be alert during the drive and know where you would like to go and share your trip with a trusted person.

The number 112 can be called from any cell phone in South Africa. It will transfer to a call centre and they will route you to the emergency service closest to you.

You will also find so called safety kiosks in hotspots across the city that were erected by the Central City Improvement District (CCID). Staff usually wears green vests and can assist in an emergency.

Because of the security issues in the country, a lot of venues have their own private security who can accompany you to your vehicle or assist in an emergency.

Unfortunately, South Africa is experiencing a crisis of violence against women which is not only limited to domestic violence but regularly occurs on a “non-partner” level. Therefore, you should not walk alone at night and take the necessary precautions when travelling to the country – especially as a solo traveler. Be sure to prepare thoroughly and have measures in place before travelling to South Africa.

The famous Long Street offers many bars and small restaurants but should not be frequented alone at night.

Camps Bay, a little bit outside the city centre, is known for its high-class restaurants, especially seafood, as well as cocktail bars overlooking the promenade.

On various days of the week, there are food markets all across the city, offering local flavours and are well-worth a visit.

All major hotels offer gyms for their guests to use. As a runner at Seapoint promenade, you will definitely not be alone and there is some outdoor gym equipment that can be used for free.

Hiking is a big sport in Cape Town but should only be done in groups, as there have been incidents of muggings in the mountains.

There is an abundance of wellness services in the city, like the Mangwanani spa. The chain Sorbet has shops around the city and offers good service for a quick mani-pedi and the likes. However, it is sometimes difficult to get an appointment on short notice.

I am a born and bred German who fell in love with Cape Town from a very early age. Since finishing high school I have intermittently worked and lived in what I think is one of the most beautiful cities in the world. Not only is the climate better than in Europe, the people are so friendly and after years of living here, I still have not discovered everything there is to see. I work in the security industry and am a partner in a local consulting business. We train people, audit hotels, draw up security concepts, and provide drivers so that corporates and their staff can concentrate on their core business. Through my work, I have the opportunity to make people see what I see and love about this city and the African continent as a whole. Yes, it is culturally very different, there are a lot of things one should be aware of and it is not always the safest. But with a bit of knowledge, one can enjoy the city. There is something special about seeing the town through the eyes of a first-time visitor and I love showing people around, discovering new things and fall in love with the city all over again, whilst they (hopefully) do the same.

Other Cities in South Africa